I awoke this morning, looked through the bedroom window and saw above, painted across the sky, a Canterbury summers’ day, like last year, Wedgwood blue and beautiful and decided I would go again to the central city to view the changes. I would go with an open heart, remembering the lines on human suffering from Katherine Mansfield’s journal ‘One must submit. Do not resist. Take it. Be overwhelmed. Accept it fully. Make it part of life.’

I started in the container mall and the first thing I did was search for Shands Emporium, looking through the new steel frames going up in the shape of rectangular buildings, at an area once known as ‘The Strip’ and home to a collection of cafés and bars overlooking the Avon River. I was expecting to see another chasm because earlier in the year I had caught a television news clip showing the developer Mr Gough watching Mr Brownlee, the earthquake recovery minister, in a small digger turning the first clod, for a news item on building developments in the city. I’d heard that Mr Gough wanted his Strip to be like Southbank along the Yarra River in Melbourne. In such a scheme a wooden building dating back to 1860 did not fit, even though it had survived the earthquakes, while everything around it, including Gough House, next door in Hereford Street, came down. The developer said that Shands Emporium was going free to anyone who would take it away.

To my surprise there it was, still standing, its two back walls packaged in black polythene while round the front the façade was reassuringly the same, though slightly brighter in colour the wide wooden boards, painted forest green and window trim a dark cherry red. I wondered had the developer had a change of heart. If the building was painted a different colour, a chocolate brown, or soft cocoa to harmonise with the new buildings, might it then get to stay?

There were promising signs elsewhere. The stone archway at the Bridge of Remembrance and the Arts Centre on Worcester Street are being carefully restored. There is a sturdy iron cladding and roof now protecting the broken Provincial Council Chambers until the restoration project can begin. The congregation of the Knox Presbyterian church held onto their beautiful wooden vaulted ceiling and have constructed a bold new church of steel and concrete with eye-catching copper cladding on walls and roof. But the soft red brick, Arts and Crafts, Chamber of Commerce building by Hearst Seager, with its carved stone sunflowers on the façade, is looking derelict. It is my understanding the Christchurch City Council has ring-fenced the building hoping that one day funds will be available to restore the architectural treasure. This scenario happened in Europe. Bombed buildings stood in ruins for decades before being sensitively rebuilt brick by brick, stone by stone and restored to their original glory.

Walking along the riverbank I noted orange traffic cones everywhere — two lying in the river — and a tangle of reinforcing wire, metal rods, mesh fences but in between I glimpsed children leaping through the water and a young woman sitting in contemplation, staring at the river. This was reassuring. This seemed normal. I turned then to photograph a large mural spread over several exposed walls on the sides of big buildings on the terrace. showing a deep inky pool with fish and penguins on ice and something that looked like a frog, except how could ice support a frog? I wanted to sink into the blue and cool off because it was 28 degrees and although I was wearing a hat and sunglasses, I had forgotten my sunscreen and my shoulders were burning. All these thoughts were whirring through my mind when I turned and saw a big pedestal standing empty. Its statue must have fallen in the earthquakes. Seeing the pedestal without a confident man on top, was like finding a person without a head. It jolted me.

The view east towards the gaping hole where the front of the cathedral, its spire and rose window, used to be triggered more distress. But then just to the right, running along the western façade of the old post office in Cathedral Square, I saw something enchanting. The artist Sara Hughes has created a ripple of colour, a fluttering wall of fabric, hundreds of pieces strung upon wires, like Tibetan prayer flags, pink, blue, turquoise, orange, yellow. Silently I cheered and said thank you to the artist.

A young boy was photographing the cathedral and the flags. He was perhaps, twelve. I asked him where he was from and he said, ‘Wellington but originally from Germany.’ Looking at the Post Office he said, ‘They should pull that down.’ I was surprised. ‘Really?’ He nodded, ‘They should pull everything down and start again.’  Did he really mean that. ‘Yes,’ he said confidently. ‘They should get rid of all these old buildings.’ And he spread his arms this way and that to indicate what is left of the heritage fabric of the city. ‘They’re messy, useless,’ he continued. I couldn’t let this go. ‘But imagine a city that is rebuilt all in one go. It would lose its history. Every building would date from the same two decades of the 21st century. Wouldn’t that be boring?’ He thought for a second and replied, ‘Well, they could keep half of it.’ When I wondered how this might work in practice he said, ‘You could keep half of the cathedral and have an old side and build something new on the other side.’ I should have stopped then but I was thinking, a young person with such firm views, might I nudge him? ‘But why not keep all of it,’ I suggested. ‘Restore the cathedral, like they did with their buildings in Germany after the war.’ He shrugged at this and so I said, ‘All the best,’ and resumed my walk.  Actually, I like his idea of half old and half new. The Holy Trinity in Parnell provides a stunning example of this approach. It incorporates four periods of architecture: the 19th century wooden church of St Mary, is on the street frontage, the main building combines the early twentieth century pared back ‘Romanesque’ style chancel and altar with a glorious soaring modernist nave built in the latter part of the same century. Now they’re adding a 21st century chapel under the oak trees at the back of the cathedral. Couldn’t a similar lateral approach be applied to the Christchurch cathedral.

As I was leaving the Square, I saw the strangest sight, not one Wizard of Christchurch, the one and only, but two wizards strolling across the paving stones. Was I hallucinating? And then I realised I was smiling and so were all the other earthquake tourists. Smiles are much needed here at the centre of the loss, along with hugs. Because still you can see for miles and miles, all the way to the Southern Alps on the western horizon.

Further down Worcester Street on the corner of Cambridge Terrace, near the Avon River, I came upon a series of buildings representing four different architectural periods. The wooden Canterbury Club (designed by Frederick Strouts with the building commencing in 1873 and later extended in 1906-07 by W.B. Armson) is on the corner with a modernist wing adjoining, added by the architects Warren and Mahoney in 1965-66. Next door is a small weatherboard house two-storeyed, from the 1940s and beside that there is a brand new sparkling white concrete and glass building, each floor stepping back, with a paved terrace and tables and black sun umbrellas below, running along at street level. I felt completely heartened to see such treasures rescued and restored.

At the gardens I paused to admire the Victorian peacock fountain, an eclectic confection of coloured decorative iron work painted in teals and turquoises with dabs of red. The water in the fountain arches gracefully from huge bowls on the central column and from the mouths of chubby porpoises to the pool below, where there are jets of water spurting up. This pleasure fountain was restored and resurrected before the earthquakes. Previously it had languished in storage at the City Council, mouldering there for years because the taste arbiters had found it vulgar, or unfashionable, or high maintenance, a folly, maybe, I don’t know. Of course the people making critical decisions back then had no idea how this pleasure fountain would lift the spirits of people now.

In the gardens my feet took me to the summer flowering herbaceous border where I walked through the middle of it, on the gravel path that divides the main border from a narrower bed against the old brick wall that borders Christ’s College. I like being immersed like this in the flowers and their herbivorous smells. There was the sharp scent of the red ornamental current Ribes sanguineum and the sweeter bouquet of geraniums, ‘Johnson’s Blue,’ and of pale blue salvias, thalictrum in two shades, the frothy lemon and the mauve, the stems of tall lime green nicotiana, the bright cerise and pink Monarda didyma and the apricot pink flowers of the geum ‘Jess.’

I was heading for the newly opened Events Centre, designed like a series of white tents, with a path and a rill with reeds. The rill is dry with stones instead of water. There I came upon two little boys in shorts and t-shirts, perhaps three years old, clambering through. The sight of them lifted my sagging spirits. I was forcing myself to return here because I was parched and in need of a drink but it meant revisiting the scene of my daughter’s wedding celebration held only last Sunday in the Cockayne Memorial Garden, followed by afternoon tea in the new function room. On that day the bridal party sat at a long table before a wall of glass, that has a cladding of white iron metal with holes cut through, to provide a screen of privacy from onlookers. Through the mesh you can see the water sliding past and the grey trunks and fuzzy canopies of the trees that border Hagley Park. I remembered feasting on the vision of the bride in her lace and the bridesmaids in their apricot pink and the junior bridesmaids in their long, white gowns, shirred bodices lined with gold trim and the flower girl in a floaty dress bought from a shop called ‘I love gorgeous’ in Notting Hill, London. The effect was that of an architect’s impression, a perspective drawing of the interior with the people sketched in for atmosphere.

I really didn’t want to return because the bride and groom have already left the city and are returning to London soon and the big, long party is over but also I acknowledged the need to confront the feeling in order to move forward. One must reach for acceptance when something good is over and feel glad that it was. Then the mind clears and embraces what is here now — a brilliant, bright blue, high summer day in one of the most beautiful botanic gardens in all the world, in a place that has survived a series of catastrophic earth movements, more than ten thousand since 4 September, 2010, and yet, is still today, enchantingly alluring, possibly even more so now. 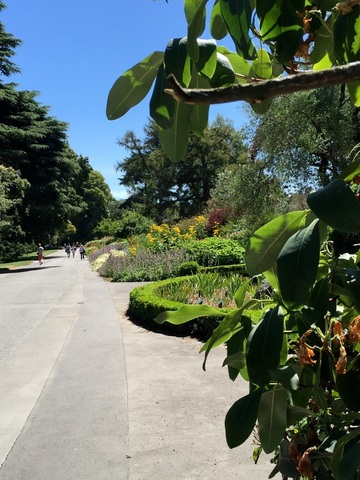