They came our oldest friends from their farm in Canterbury, to the city for dinner at the end of a long, hot, January nor’ west afternoon.  We ate outdoors on a terrace beside a lawn that sloped down to a stream. The meal was salmon with salads, roasted vegetables, wine, berries, meringues. This felt significant, sharing good times again with good people.

Earlier that afternoon I had noticed that, occasionally, memories of better times in the broken city have begun surfacing. This was reassuring. I had thought the earthquakes had damaged my remembering process irrevocably and that it was no longer possible to remember back to childhood and youth without being overwhelmed by subsequent images of the more recent destruction and horror. Perhaps as the city rebuilds and as optimism about its future slowly grows the pain might lift somewhat.

After dinner we set off for the central city for a walk through the streets. The intention was to seek out the street art, the graffiti, the murals, the giant-sized reproductions of paintings from the permanent collection at the Christchurch Art Gallery. I wanted to see again Linley Richardson’s painting of  Cynthia’s Party (1926-27) were the children, their smooth, round cherub faces echoed in the pale hydrangeas, are gazing in wonderment at candles alight on a cake. We would look for the installations and gap filler projects that have flourished amongst the ruins. And there would be a visit to the memorial for those who died on February 22nd   2011, to view a very poignant collection of 185 white painted chairs of all shapes and sizes from large down to tiny and child-sized.

We reached the city at 9pm while it was still warm, still just light, the sky a broad expanse of mauve-grey light. We trod those streets in awe. Sometimes the groupings stretched out, as people fell back to contemplate the starkness. Once or twice I caught my friend staring at the desolation and saw in her expression a mixture of profound disquiet and bewilderment. Back from London briefly with her family she was trying to catch up. Her husband said, “I had no idea it was so bad. I hadn’t realised the scale of loss.’ He too looked hurt.
I used to think that New Regent Street built in the outlandish Spanish Mission style looked like a film set, plonked here from Hollywood, so out of place amongst the older Victorian and Edwardian street architecture. Now it is even more startling. Recently my sister said, ‘The thing I find really disconcerting is that you can see the street from the cathedral. Now that’s not right.’ Once upon a time New Regent Street was hidden behind a thicket of buildings. Now all those buildings are gone.

Further on we came upon a giant rudimentary xylophone with padded cricket bats attached. Everyone had a turn making muffled thuds, off beat, disconnected, the sounds an erratic pumping like our jumping hearts.

And this is how it is now, visiting Christchurch. Although I have been coming regularly and trying to engage with the city as it changes, still the pain, when I see the empty spaces, hits me in the stomach. Possibly I will never get over the destruction of a city I once knew and depended on, but I will continue to face into the loss and work at finding a state of inner tranquillity and acceptance. One thing I know for certain is that I will keep on returning to the city of my birth, I will never give up on her. 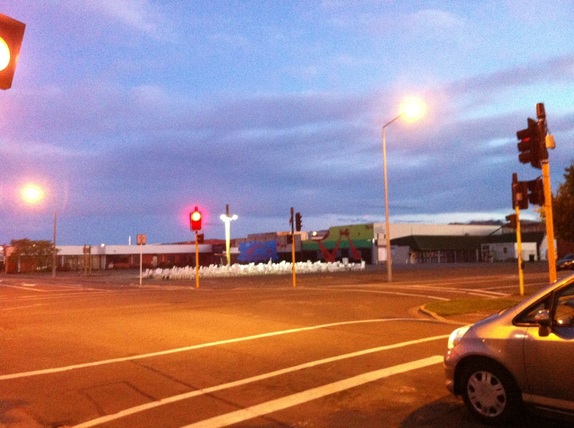