Darling Margaret Mahy, the gifted author has died. The literary community, her global fans and followers and the people of New Zealand mourn her loss. The world suddenly seems less, with the passing of a great writer.

I was writing the Epilogue to a current book in progress when my phone flashed a message. It was my daughter texting to tell me she had seen on the Herald website that Margaret Mahy passed away today, Monday 23 July at the age of 76 after a brief illness. Cleo wrote, ‘She was an inspiration. I am glad you got to tell her story.’

Feeling shocked and bereft, I went to my study and pulled out my book, Her Life’s Work, to look at Margaret’s portrait taken by New Zealand photographer Marti Friedlander one autumn day in 2008, before the earthquake that changed the world order in Canterbury and when it was a kinder, more benign place. On that day the light was mellow and Marti and Margaret, who were meeting for the first time, were pleased with each other. Margaret was an ideal subject. She graciously moved around her house, into corners, out onto her upstairs decking, lifting her feet carefully over the sprawling leaves and tendrils of a grapevine, at Marti’s rapidly issued instructions. She put on a hat at Marti’s request. She perched on the back of a sofa in her living room near the light of the tall picture window that reached to the roof, like a window in a church with a view straight up Lyttelton Harbour and in front of the big stone paved wall above her fireplace. Marti, told Margaret to laugh and Margaret let out a most joyous sound that bubbled up from her inner being. We all three smiled and Honey the dog wagged her tail. Marti had her photo.
These books have been illustrated by the most famous of children’s book illustrators from New Zealand and overseas. Their covers sing alongside a vase of pink and apricot toned roses picked just now on a wet Auckland winters night from the Mutabilis that is still flowering beside the birdbath, full tonight with turquoise crackle glazed water. I have arranged the shiny, droopy, silky blooms in an amber glass vase, beside a candle that is burning for Margaret, to remember a woman who was brilliant and kind, who was blessed with a playful and richly inventive imagination and a fine intelligence, who turned words into magical lines that remain with us and will keep us company now that Margaret has gone…

The little boy said, “Mother there is a lion in the meadow.”

The little boy said, “Mother there is a big, yellow lion in the meadow.”

The little boy said, “Mother, there is a big, roaring, yellow whiskery lion in the meadow!”

When the table was arranged, I phoned my mother who was not yet asleep at her rest home in Merivale and shared the sad news. I had hesitated to phone because my mother was fond of Margaret. I hated being the bearer of such news but knew she would rather hear it from me than on the radio or the television.
It was a wonderful event. The room was packed with our friends and with Margaret Mahy fans. My mother hosted the event and broadcaster Ruth Todd posed questions following the launch speech. Afterwards Margaret signed books and then she drew the lion, from the lion in the meadow, for my goddaughter to illustrate her signature. The book queue suddenly grew longer and longer.
‘Will you have one more cup of tea?’ I hesitate. ‘I’ll put another log on the fire,’ says Margaret brightly. ‘Oh why not,’ I say, ‘A quick cup for the road.’ Watching the flames leap up the chimney while Margaret prepares tea one last time, I think to myself, ‘I could stay on here very easily.’

Out in the lane, the shadows are falling and giant poplars are rustling. Margaret reaches out and hugs me. As I drive away I can see Margaret and Honey and Socks in my rear vision mirror, the three of them watching my car and thinking their individual thoughts.

In my book I asked Margaret about many things and she enjoyed the questions. Right at the end I asked about her life’s trajectory using a quotation from a book Composing a Life by anthropologist Mary Catherine Bateson.

In her book, Composing a Life, Mary Catherine Bateson described the life path of a creative woman as being like ‘a middle eastern pastry in which the butter must be layered in by repeated folding’ – and how early on one’s life might seem like a jumble but later it all made sense. If you were to describe the shape of your life, what would it look like?

I think that’s a pretty good description, don’t you? Although I think that, on the whole, I have thought of myself as a writer. I didn’t particularly think of myself as a mother. On the other hand, I certainly wouldn’t have wanted to be left out of that. It seems to me that being a mother is such a basic human experience. And of course I adore my daughters, and they’re very fond of me, and we do well.

Are you suggesting then that the single, over-riding identity, that of the writer, has taken you through life?

Well, it’s certainly been a very persistent thread that was put in place early and which I have followed through very strongly. And I still have a notable family life, living here as I do with the animals. And I’m a grandparent and all those other things, but even if I have slowed down a lot, predominantly in my own head I’m a writer.

And then I asked ‘Do you think about death and dying?’ and she replied:

Oh, yes, and I’m not particularly horrified at the thought, no I’m not. Probably like many people I assume that after I die I will somehow know what is going on. She laughs. I have to remind myself that that’s not necessarily true.

I don’t know exactly what death indicates. Some people think it’s just a change of individual existence and that we go on in another form. Other people think you stop. And I know that you stop being what you currently are – but I’m not frightened of dying. I think death is one of the fundamental human mysteries.

Margaret Mahy is one of New Zealand’s greatest living writers, recognised internationally for her books for children and young adults. She began writing as a young child, stitching together her first story at the age of seven and writing her first novel, Belle Gray – about a cowgirl who leads a gang of outlaws – by the time she was 11. Margaret attended Auckland and Canterbury universities, graduating with a BA in philosophy and English in 1955. After completing a library diploma in 1956, she worked for the School Library Service (1967–1976) and then as a children’s librarian at Canterbury Public Library (1976–1982).

In 1961 she sent a collection of stories to the New Zealand School Journal, which was enthusiastically received by the editors, initiating a working relationship with the journal that lasted over 25 years and resulted in more than 90 stories.

Initially Margaret found it difficult to publish in New Zealand because her stories were not located in a recognisable New Zealand setting. But in 1969, at the age of 32, her writing was discovered by the New York publishers Helen Hoke-Watts and Franklin Watts, who published five of her stories simultaneously, including an all-time favourite, A Lion in the Meadow, in New York and England. A further hundred stories were subsequently published with pictures by some of the world’s best illustrators – Shirley Hughes, Helen Oxenbury, Quentin Blake and Steven Kellogg.

Today Margaret Mahy’s books are read far and wide and have been translated into 15 different languages. Several novels – including The Haunting of Barney Palmer (1986), Cuckooland (1986), Typhon’s People (1993) and Maddigan’s Quest (2005) Kaitangata Twitch  (2005) – have been adapted for television. In 1989 animator Euan Frizzell brought five of her best-loved stories to life in the video recording The Magical World of Margaret Mahy.

Margaret has probably received more awards and recognition than any other New Zealander. She has won the Esther Glen award six times and the prestigious British Library Association Carnegie Medal twice for her young adult novels The Haunting 1982 and The Changeover 1984. Her novel Memory (1987) won four international prizes including the UK Observer Teenage Fiction Award. She was made a member of the Order of New Zealand and an honorary Doctor of Letters, Canterbury University, in 1993 and in 2005 received the Prime Minister’s Award for Literary Achievement. In 2006 she received the Danish Hans Christian Anderson Award in recognition of a ‘lasting contribution to children’s literature.’

She has been the subject of several biographical investigations, including Margaret Mahy: a writer’s life (2005) by Tessa Duder, and was recently interviewed by author Elizabeth Knox, for the documentary A Tall Long Faced Tale (2007). Margaret lived in Governors Bay, on the edge of Lyttelton Harbour, in a 1970s architecturally designed home with beautiful fruit and flower gardens that she levelled and designed herself. Margaret maintains a close relationship with her two daughters and seven grandchildren. Recently she published a major work, The Magician of Hoad, and there is a history of New Zealand, Awesome Aotearoa: Margaret Mahy’s History of New Zealand in the pipeline. 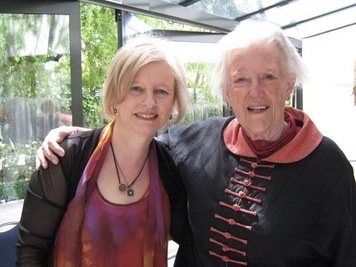