Happiness in his Eyes: a story of love and disability by Louise Inglis 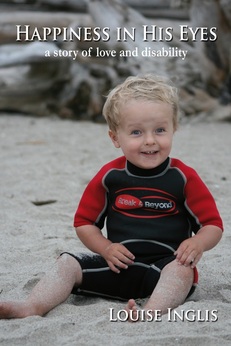 In 2010 Deborah mentored new writer, Louise Inglis on the First Chapters programme, Nga Wahanga Tuatahi, held in Manukau and Papakura. Louise came to the course with the intention of acquiring the skills to help her write a book about her experience as a mother nurturing a child with Autism, profound intellectual disability and Epilepsy. She wanted to write about the first seven years of her son Kevin’s life and the overwhelming challenges facing her family as they grappled with the initial shock and grief and with the endless questions: ‘How do we maintain family life while doing the very best for Kevin?’ What does this mean for our other son? What of my marriage? My career? Can we recover a semblance of normality? What is normality?’

During a mentoring session, Louise mentioned that she had kept a journal since Kevin’s birth and on those pages had been recording her thoughts and feelings. I was immediately interested. Keeping a journal is a very worthwhile practice for a writer because in writing regularly we develop our craft. I also knew that the journal excerpts would provide the necessary authentic detail that is quickly forgotten if we are not making a habit of daily recording. Louise quotes from her journal in places in the book and those entries have a raw power that is genuine and heartfelt.

When Kevin is four years old Louise writes in her journal;

Lately I’ve been feeling down about Kevin’s autism. At four years old he still cannot speak at all. Nor can he play with trains, cars, blocks or puzzles. His level of play is still at an infantile stage of simple exploration. He will pick something up, look at it, throw it down, pick up something else, put it in his mouth, scatter it across the room, pick up something else try and rip it, and so it continues. Occasionally when he is fully guided he will attempt simple play but only ever fleetingly.

Initially Louise didn’t feel too concerned about his delayed development but on this day she is troubled by a cold fear Kevin may ‘never get out’ of this stage:

Now that he is four, I fear we may never get out of this stage. It has gone on far too long and there is little sign of forward development. It’s so physically exhausting dressing, toileting, lifting and calming a four-year-old, 19 kg ‘baby.’ Progress appears so slow...

Kevin is often wakeful at night and Louise remains ever alert to his needs. On this night she wakes and goes to him;

I felt so sorry for Kevin early this morning. I woke and heard him ‘talking’ in his cot. I went to check on him and his hands were freezing cold. He’d thrown his blankets over the edge of the cot and I’d forgotten to turn the heater on when I put him to bed. His cough was dreadful and his runny nose had spread all over his face.

I picked him up, rubbed his hands and cuddled him trying to warm him but he pushed me away. He wanted to get dressed in his day clothes but it was only 4 am. I cleaned his face, turned the heater on, gave him some Pamol and Demazin and put him back to bed. He pouted his bottom lip and cried loudly. Sometimes, not too often but at times like this, I wish I could ask him if his throat is sore and have him understand me when I say, “You need more sleep.” Instead he stood up stiffly and cried vehemently as I left him looking so abandoned.
And that is perhaps the biggest achievement of the book. Louise is writing about a situation few of us could begin to imagine and about a subject that is potentially unsettling and confronting. Through a delicate balancing act, contrasting the hard, unpalatable facts with the breakthroughs, the solutions, the moments of laughter and joy and the sheer kindness of others, she transforms her material into an enlightening book.

The sibling experience is often less well explored but Louise was sensitive to how her son Matthew would feel about a book that was focussed, like their lives, on his brother Kevin. She wanted to portray his experience. At a certain point we discussed the ethical issues around writing about the people we are close to. It is tricky but if a writer can show respect and insight towards her loved ones and write with good intentions, while remaining true to her own experience and to the demands of the storytelling then the outcome will be positive.
I was three when Kevin was born. I would like a brother I could play with and talk to. Kevin makes a lot of noise. He cries a lot and kicks the back of my seat, but he never talks to me. Sometimes I wish he was never there.

I really like cats. If I could be an animal, I would be a cat. I think Kevin would be a frog. Kevin doesn’t notice cats. He ignores animals. We had a big dog and Kevin ignored him. He doesn’t really do anything unless someone is with him.

The editing process. A year following the First Chapters mentoring programme, Louise forwarded the first draft of Happiness in his Eyes. It wasn’t quite complete but Louise was keen to discover whether she was on the right track. I read it in one sitting. There were three edits of the book altogether and each time Louise responded to my suggestions with grace and a willingness to always work harder to craft her story. There must have been times when she wanted to grit her teeth and hiss. I was rigorous. I told her ‘less is more,’ urging her to trim the excess and to avoid overstatement. At one point I said there were too many tears, yes they were entirely understandable but I urged her to pull back so that the really profound moments in her story could exert their full power. Louise understood and pruned, rewrote and shaped her story.